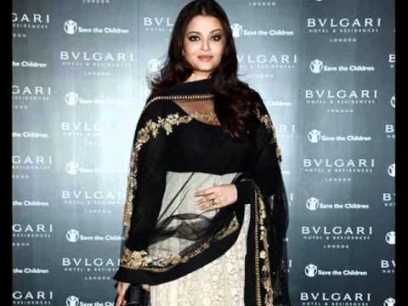 After receiving enough criticism about her post pregnancy weight gain and then making a graceful appearance at the Cannes Festival 2012, Bollywood actress Aishwarya Rai attended the opening of the Bulgari Hotel and residences in London on June 12, 2012. Rai at the event flaunted her fashion sense, which seemed much improved than the Cannes appearance.

Once again the actress chose to do go the traditional way and looked stunning in a Sabyasachi Mukherjee creation. Ash appeared in a black and white kali kurta which suited her the most and also helped her look glamorous and stylish.

The dress with net and tulle finish worked wonderful for the actress and even helped her hide her weight. The flowy dress resembled a gown which had golden embroidery work that gave a touch of modernity and traditional Indian wear.

The appearance of Ash at the event was quite surprising as she looked stunning and looked less chubby. Ash was reportedly invited as the special guest to celebrate the opening of the Bulgari Hotel and Residence. The ‘Dhoom 2’ actress also got an opportunity to meet the Italian actress and film maker Isabella Rossellini. The event was also attended by the popular British Indian actor Dev Patel.