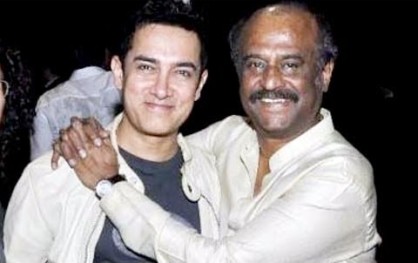 After Bollywood actor Shahrukh Khan, managed to rope in South Super star Rajinikanth for a cameo in his movie ‘Ra.One’, even Aamir Khan is now keen on sharing screen space with the south actor. Aamir is right now preparing for his upcoming movie ‘Dhoom 3’ and there are chances that the ‘Taare Zameen Par’ actor might get to appear with Rajini.

Aamir in the upcoming movie will be seen in the role of a villain. The movie will also have actress Katrina Kaif along with Abhishek Bachchan and Uday Chopra.

Sources from the production unit say that there is a scope for another villain in the upcoming action flick. While every one is aware that ‘Dhoom 3’ is all about crossing boundaries, attempts are being made to rope in Rajini not just for a cameo but for a full fledged role.

Even Aamir is keen on working with the south star as he too is an ardent fan of Rajini Sir. Rajinikanth is now only known in south film industry, but so in Bollywood as well as abroad. Till now Bollywood stars like Aishwarya Rai and Shahrukh Khan have worked with the super star and now its time for Aamir to have his piece of cake.