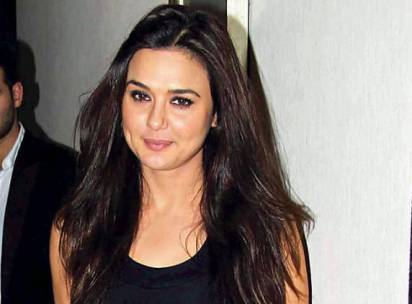 It has been a long time since the fans of Preity Zinta have seen her in a Bollywood movie. But now the actress is back to films and has also started shooting for her upcoming movie ‘Ishkq In Paris’.

Apart from acting, the actress is also making her debut as a producer. The movie is directed by Prem Soni and has been co-written by Zinta, with which it seems like the actress has started taking her films seriously.

The movie went on floors a few days back and choreographer Saroj Khan will be looking after the dance moves. Preity will be taking dance lessons from the ace choreographer and the actress could not control her excitement.

Preity wrote on her Twitter account, “Shooting 4 a song 4 Ishkq In Paris with Sarojji! What a pleasure it is 2 work with her after so long! She has taught me everything I know.” The ‘Soldier’ actress in the movie will be seen playing the role of a Pakistani lady. The movie also has French actress Isabelle Adjani and even Salman Khan will be seen playing himself. Preity was till now busy in other things like managing her Indian Premiere League team ‘King Eleven Punjab’ and had also hosted a TV show.