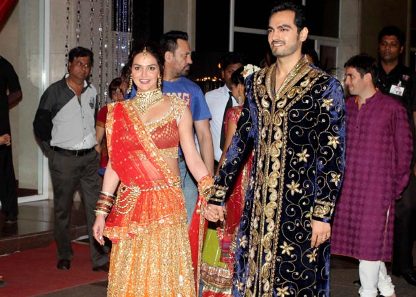 Bollywood actress Esha Deol has on June 29 tied the knot with Bharat Takhtani in a South Indian style wedding ceremony at the Iskon Temple in the morning. The actress looked stunning and glowed in a red bridal outfit created by popular celebrity designer Neeta Lulla.

The veteran actress also said that it was not possible to organize the wedding at their residence due to which they chose a temple as it is the perfect place for a matrimony. The surprising part was that Esha’s step brothers Sunny and Bobby Deol were not seen at any of the ceremonies of the wedding . They were not even seen at the wedding at the temple. A grand reception will be thrown on June 30 and all the Bollywood celebrities are expected to attend the reception. Esha and Bharat got engaged on February 12, 2012.