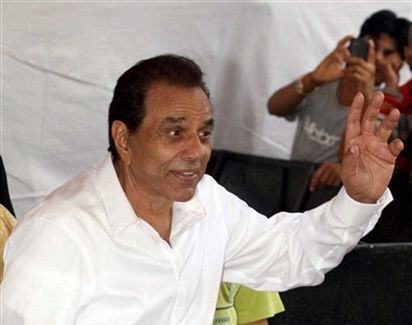 Amidst all the celebration mood during Bollywood actress Esha Deol’s wedding, the fact did not go un-noticed that Esha’s half brothers Sunny Deol and Bobby Deol were absent from the wedding celebrations. When veteran actor and Esha’s father Dharmendra was asked about it, the actor lost his cool but refrained from answering such questions.

Dharmendra was twice asked by the reports why his sons Sunny and Bobby were absent from the wedding, to which the actor lost his temper and said, “Aap bakwaas mat kijiye (Don’t talk rubbish).” Later the actor cooled down and said, “I am happy, so be happy and ask happy questions”.

Close friends of the actor revealed that Sunny was busy shooting while Bobby was in London with his family due to which they could not make it for Esha’s wedding. However, Sunny had attended Esha’s engagement party in the month of April.

Dharmendra’s incomplete answers and his sons’ absence from the wedding had indicated that all was not well in the family. Esha got hitched to Bharat Takhtani in a temple wedding on June 29, 2012. The wedding celebration was joined in by the Who’s Who of Bollywood. Esha is the daughter of veteran actors Dharmendra and Hema Malini of the movie ‘Sholay’ fame.