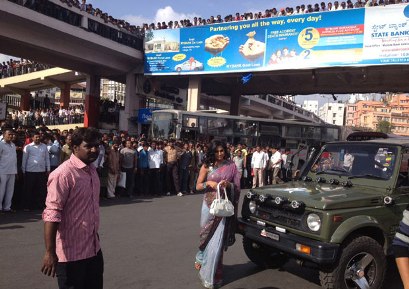 While Pakistani actress was shooting for the Kannada version of the Bollywood movie ‘The Dirty Picture’ in Bangalore, the shoot had to be halted because of Malik’s crazy fans. The actress at the shooting location was mobbed by her fans who wanted to catch a glimpse of the Pakistani beauty.

More than 20,000 fans of the actress turned up to watch Veena and also created a traffic jam. At a point the situation went out of control and the producer of the film had to call the police to handle the fans. Veena carried a mild smile on her face and also signed autographs. Veena was earlier also mobbed at Fiji Beach in Australia.