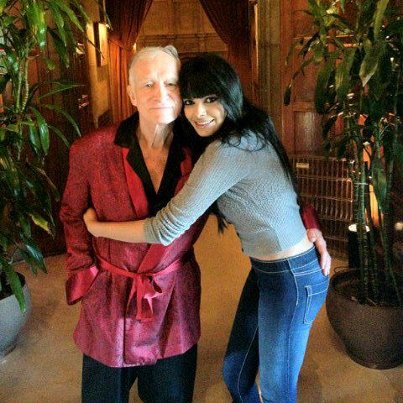 Bollywood actress Sherlyn Chopra has become the first Indian girl to appear on the cover page of the popular adult magazine ‘Playboy’. Chopra came in and cracked the jackpot while actresses like Sunny Leone and Poonam Pandey are still working on their Bollywood projects.

The actress recently posted a few pictures of herself on Twitter from her Playboy shoot. Sherlyn also posted a picture of herself with Hugh Hefner and it seemed as if the actress was having a great time at Hefner’s mansion.

Sherlyn Tweeetd, “The most compassionate man on planet Earth! Even at 87,he knows how to be an effortless charmer!!!”. Even in an interview, the actress said that she was proud to be the first Indian girl to grace the Playboy cover.

Last year the actress posted a few nude pictures of herself on her birthday as a return gift for her fans on the social networking site. Chopra even grabbed eye balls with her racy photoshoots. The actress was also a part of the third season of the celebrity reality show ‘Bigg Boss’. However, it might now have been easy for the actress to pose nude for the magazine. The actress also had a test photo shoot and made her confident to visit the ‘Playboy’ mansion.