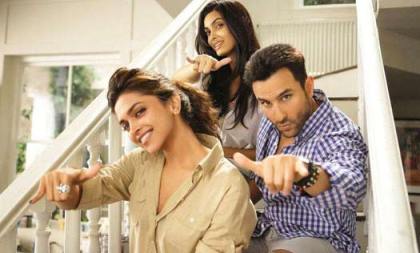 Bollywood movie ‘Cocktail’ starring Deepika Padukone, Saif Ali Khan and Diana Penty has been released on July 13, 2012. The modern day love triangle movie has been directed by Homi Adajania who has managed to make the most of appealing locations, characters and music.

The story of the movie is about a rave lifestyle between the characters where they sleep with each other after a drunken night. The two girls in the movie Deepika and Diana are in for a race to win Saif’s heart.

Saif in the movie does what he does the best. He plays the role of a flirt and a buffoon. For a change Diana is a fresh change from all the regular faces, but still needs to work on her acting abilities. But the director has played smart and has given her a role which does not peak at any point.

The centre point in the flick is Deepika who looks sizzling hot and plays the role of a photographer Veronica. The first half of the movie is visually enjoyable while the second half might seem dragging. The story is the major drawback of ‘Cocktail’ but overall it is definitely a one-time watch, something which can be enjoyed at the weekend.