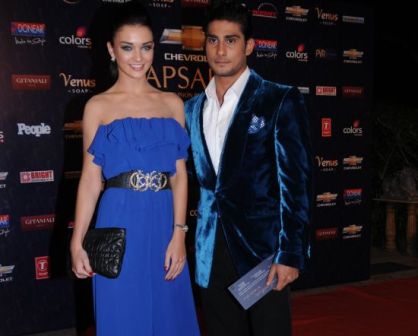 After showcasing intense love for each other, Bollywood couple Prateik Babbar and Amy Jackson have reportedly called it quits. Jackson and Babbar were dating for about a year.

Earlier reports claimed that they were living together but the possessiveness of Prateik led to the separation. The two had even tattooed each other’s names.

On the other hand the close friends of the actors have claimed that the two have taken a break from each other so as to concentrate on their career. Prateik and Amy were seen playing lovers in the movie ‘Ekk Deewana Tha’ and had even expressed their love in public forum.

The two often displayed their love for each other by appearing together at public events. More reports claimed that Prateik had even introduced Amy to his family members and vice versa. Latest reports say that Amy was getting tired of Prateik’s possessiveness and decided to call off their relationship. But the representatives of Amy denied the peration rumours. The representative while talking to the reporters said the two are concentrating on their respective careers and are shooting for their films in Tamil and Hindi due to which it is not possible for them to meet up every other day.