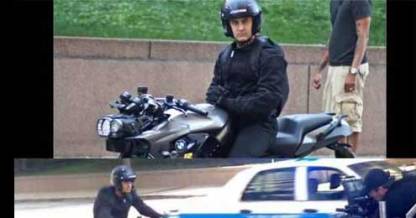 Bollywood actor Aamir Khan has already left for Chicago for the shooting of the movie ‘Dhoom 3’. Just two days later some images have been leaked of the actor while he was shooting for the movie.

The images have revealed the look of Aamir in the movie. Aamir in the images is seen dressed in black outfit on a super cool bike. Reports say that the team was shooting for the final sequence of the film in Chicago.

The movie is written and directed by Vijay Krishna Acharya and is produced by Aditya Chopra. The movie is the third instalment of the ‘Dhoom’ series and Aamir in the movie will be seen playing a negative role.

The Yash Raj movie also has Abhishek Bachchan and Uday Chopra who will be seen playing their original roles of Jay and Ali respectively. The movie will also have Jackie Shroff who will be appearing in a cameo role. Earlier actors like John Abraham and Hrithik Roshan had played the negative roles in the previous versions. With the involvement of Aamir in the flick, the curiosity of the audience has also increased and also has huge expectations from it. Aamir for the next three months will be busy shooting for the movie in the US.