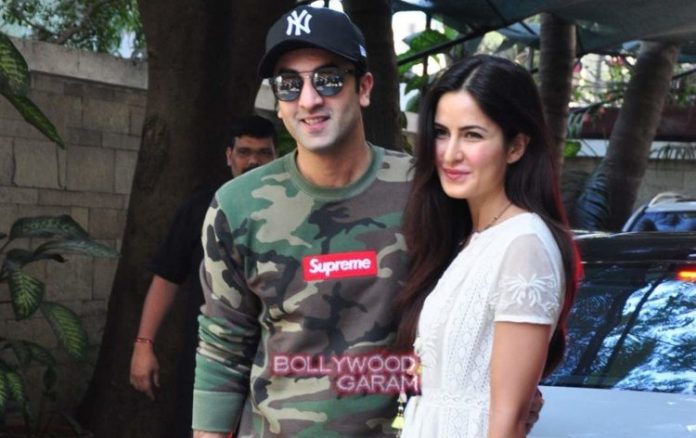 Bollywood couple Ranbir Kapoor and Katrina Kaif were recently in news for their alleged break-up. The recent brunch that they attended together put rest to the rumours about their break-up. Moreover, the actors, were snapped having a cozy moment at their Bandra apartment in Mumbai.
Katrina was shooting for the upcoming movie ‘Fitoor’ at Filmcity and came home after a long tiring day to find beau Ranbir at home. Ranbir was seen relazing in his balcony since 9 pm while Katrina walked in at 10:30 pm.
The two were seen kissing and chatting together for about half an hour. Katrina broke her every year tradition of visiting her native London for Christmas to be with the Kapoors for the brunch. Ranbir and Katrina had not been so paparazzi friendly in the last, but this time the two were seen obliging for the shutterbugs at the annual lunch with family.
Most of the celebrities in Mumbai have left the city to ring in the New Year at exotic destinations. But Ranbir and Katrina have decided to stay at home due to the actress’s work commitments. On the work front, the actress was last seen in the movie ‘Phantom’ and is preparing for the upcoming movie ‘Fitoor’ and ‘Jagga Jasoos’.