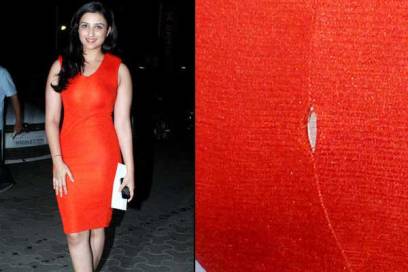 BollywoodGaram.com: Bollywood actress Parineeti Chopra might be known for her charm and her presence on screen, but now the actress has received unwanted attention from the paparazzi. During a special screening of the movie ‘Shirin Farhad Ki Toh Nikal Padi’ on August 23, 2012 the actress’ dress tore from behind and led to an embarrassing, but tiny ‘wardrobe malfunction’ for Miss. Chopra.

Our sources say that it was her alertness which saved the day. An eyewitness present at the event said that Chopra was wearing a coral dress which was too tight for her frame and within ten minutes of her entry, her dress developed a tear near the zip.

But the ‘Ishaqzaade’ actress soon realized it and ran for a cover before it got any worse. Parineeti is just two films old but has already caught fame in the industry.

The actress, who is also the cousin of the Bollywood star Priyanka Chopra, is in high demand among the film makers. Chopra started off her career with the movie ‘Ladies Vs Ricky Behl’ opposite Ranveer Singh and also won a Filmfare Award for the Best Female Debut. Chopra was also nominated for the Best Supporting Actres and she later received commercial and critical success with the movie ‘Ishaqzaade’ which marked the debut of Arjun Kapoor, son of Boney Kapoor.