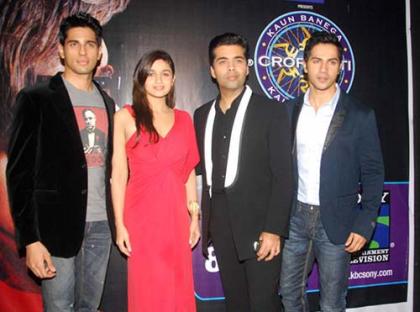 The entire cast and the director of the upcoming movie ‘Student Of The Year’ landed up on the sets of the game show ‘Kaun Banega Crorepati’ to promote their flick. Film maker Karan Johar appeared along with the cast Alia Bhatt, Varun Dhawan and Siddharth Malhotra.

Johar while interacting with the media said, “We are very excited! In fact all of us are not only excited but super excited! I know that all of us are really nervous too, because you are on national television and being questioned about general knowledge, which we are all meant to know!” Even Amitabh Bachchan wrote on Twitter, “Recollecting early school days on KBC with Karan, Alia, Varun and Siddharth, stars of SOTY .. a nostalgic joy !! Gosh !”

The movie will mark the debut of three new comers Alia, Varun and Siddharth. The makers of the movie especially Karan are super excited about the movie which will showcase young love of the college days.

The song from the movie ‘Disco Deewane’ has already become popular. Meanwhile KBC is in the sixth season of the show and is being telecasted on Sony Entertainment Television. The movie is all set to be released on October 19, 2012.