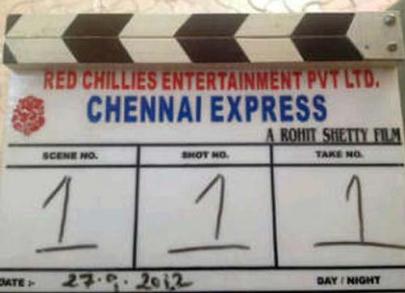 Bollywood star Shahrukh Khan, before the release of the upcoming movie ‘Jab Tak Hain Jaan’ has already started work on his next project which is titled ‘Chennai Express’. For a while now, the makers of the show were in search of a suitable cast for the flick, after which Shahrukh and actress Deepika Padukone were roped in for the movie.

The Rohit Shetty movie is a romantic thriller, and this will be the second time the two actors have been cast together after ‘Om Shanti Om’, a movie by Farah Khan. ‘Om Shanti Om’ was also Deepika’s cinematic debut and the actress was fortunate enough to share screen space with the ‘King Khan’ of Bollywood.

The movie will be produced by Shahrukh’s ‘Red Chillies Entertainment’ and UTV Motion Pictures. As per our sources filming has begun as of last Thursday, Sept 27, 2012.

We will have to wait and watch if Shahrukh and Deepika will be able to re-create some  ‘Om Shanti Om’ magic on the Chennai Express. The upcoming movie will be directed by Shetty of the ‘Golmaal’ series fame  who is well known for other flicks, such as ‘Singham’ and ‘Bol Bachchan’. The movie will be released next year but the release date has not yet been revealed by the makers.