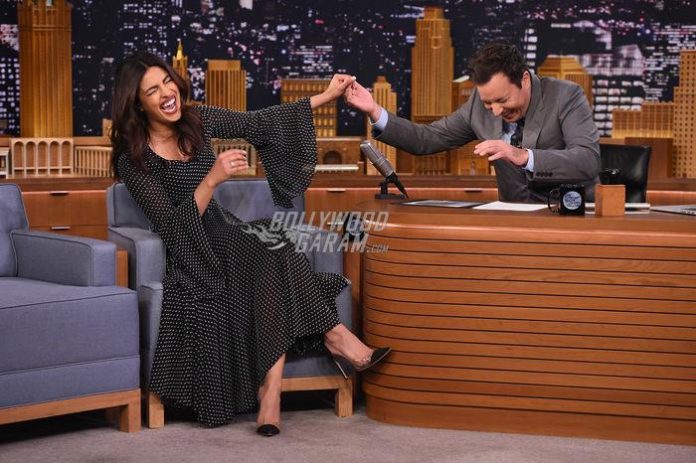 Actress turned international singer Priyanka Chopra appeared on ‘The Tonight Show’ hosted by Jimmy Fallon’ on September 22, 2016. This was the second time the ‘Barfi’ actress appeared on the show and looked pretty in a black dotted outfit.

The audience went wild as soon the Priyanka entered the stage and looked drop dead gorgeous despite the fact that she had just got off the car to be on the sets.

Host Fallon talked about the long red outfit that she wore for the Emmys and the way she twirled every time she was asked to posed for pictures. The actress had a good laugh as she said that she looked like the dancing emoji. Jimmy also showed a picture of Priyanka’s passport which he claimed looked like a ‘big sandwich’. The ‘Bajirao Mastani’ actress explained that she travels all year round and runs out of pages to stamp. However, Priyanka insisted that she has a house in Mumbai, New York and LA but will remain a ‘Mumbaikar’ always.

Chopra also talked about her new TV series ‘Quantico’ and revealed a few details about her character and the plot of the series. The fun part was when the host challenged Priyanka with the game of apple bobbing. Priyanka not just accepted the challenge but came out with flying colors by bobbing five apples in 20 seconds.

Unfortunately, the host could not even bob a single apple and Chopra landed up giving a few tips on the game to the host. Priyanka was last seen in the movie ‘Bajirao Mastani’ and is currently filming for the new season of the American series ‘Quantico’. Chopra also finished shooting for the action comedy series ‘Baywatch’ in which she will be seen playing the main antagonist. The damsel does not stop there as she is also producing two regional language films under her production company ‘Purple Pebble Pictures’.