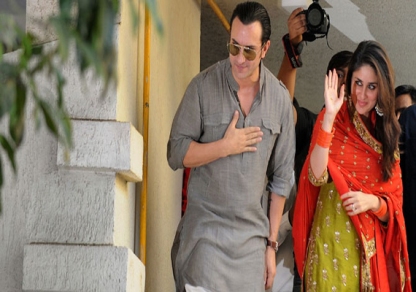 The grand reception of the newlywed Bollywood couple Kareena Kapoor and Saif Ali Khan will be held in Delhi on October 18, 2012. Their pre-wedding celebrations had started on October 14, 2012. Apart from several Bollywood celebrities, the guest list of the event is also expected to include several politicians and former cricketers.

Some VVIPs like the UPA Chairperson Sonia Gandhi, the Deputy Chairman of Planning Commission Montek Singh Ahluwalia, BJP leader Arun Jaitly, Chief Minister of Delhi Sheila Dixit as well as former cricketers Abbas Ali Baig and Kapil Dev are expected to arrive at Dawat-e-Walima for the reception. The reception will be hosted by Saif’s mother Sharmila Tagore.

Tipsy Anand from the event managing company Good Earth said that they will be decorating the whole venue which will have an off-white and gold theme with jasmine flowers. The stage will be set in Mughal style, and will have antique props which are 200 years old.