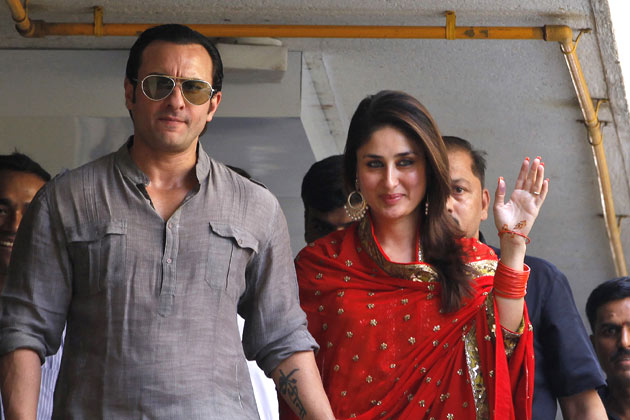 BollywoodGaram.com: Bollywood’s famous couple Saif Ali Khan and Kareena Kapoor have registered their marriage and are now man and wife! Saifeena got married on October 16, 2012 after the marriage was registered at Saif’s place in Mumbai, where Kareena’s parents and Saif’s mother Sharmila Tagore were present as witnesses. This was followed by a grand reception which saw many big stars in attendance.

The couple will now have their second high-profile wedding reception in the capital Delhi today, October 18, 2012.

Fans across the world have been hunting for pictures of the biggest wedding ceremony of the year, so here are some of Saif Ali Khan and Kareena Kapoor’s wedding photos.

Soha Ali Khan at the sangeet

Kareena Kapoor looks stunning on way to the sangeet.

Mr and Mrs. Khan, after registering their marriage in Mumbai.