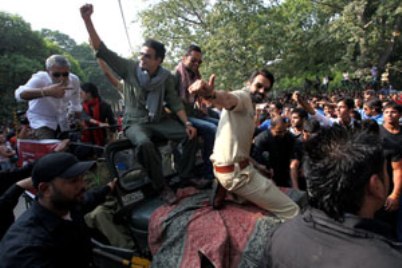 Bollywood actor Arjun Rampal, who recently visited Delhi University on October 18, 2012, was mobbed by the students. The actor visited the campus to promote his movie ‘Chakravyuh’ and was sitting on an open jeep, when fans tore off his shirt.

About 30 security personnel were deployed with the actor for the promotion. The 39 year old actor was seated on the bonnet of the jeep when the over enthusiastic students caught the actor and started tearing his clothing. Earlier, the crew had turned up about two house late for the event and were seen dancing to the tunes of the controversial song ‘Mehengai’. The movie also stars Abhay Deol, Manoj Bajpayee and Esha Gupta.