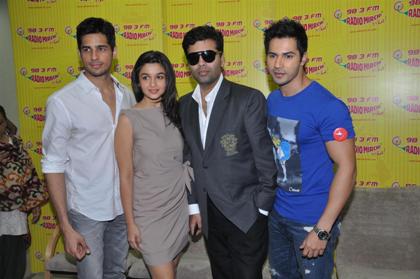 Filmmaker Karan Johar has a lot of confidence over the ‘Student Of The Year’ debutantes  Alia Bhatt, Varun Dhawan and Sidharth. This is the reason that the trio has been cast for yet another movie for Dharma Productions, if sources from the production unit are to be believed.

According to the production house sources, the actors have been cast even before the outcome of their current move with the ace director. However, Varun might have to make some adjustments to his schedule, or he might have to rethink his next move; as the next movie ‘Dharma’ that he has committed to, is David Dhawan’s film, who is his father.

Initial reports have said that the ‘Partner’ director might have to give away his younger son for the home production, which will be directed by elder son Rohit Dhawan. David said that he has a leading man and a filmmaker at home, due to which he is keen on starting his own home banner.

The ‘Shaadi No. 1’ filmmaker added that none of his sons wanted to begin at home and wanted to start off outside their comfort zone. The ‘Coolie No. 1’ director also said that he and his wife fully support their sons’ decisions. The production unit also informed that Karan is keen to launch the newcomers and also wants to see their careers through to success. On October 18, 2012, the debutantes hosted a private screening for their family and friends for their movie.