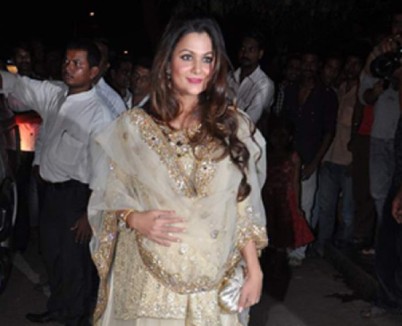 The news about the baby came from actor Arbaaz Khan, who is married to Amrita’s elder sister Malaika Arora. Khan Tweeted, “Yipppeeeee! Amrita and Shakeel have another baby boy!!! He’s too cute! Congrats”.

Sister Malaika also confirmed the news through an SMS, which said that Amrita has been blessed with a baby boy. But no further details have been revealed.

Amrita was seen attending the high profile Bollywood wedding of Kareena Kapoor and Saif Ali Khan during the last week of her pregnancy. Amrita was seen at almost all the functions of the wedding.

The actress is married to businessman Shakeel Ladak and are already parents to Azaan, who was born in 2010. Khan got married in the year 2009 and had given up her Bollywood career post marriage. The actress has done a few films in Bollywood including, ‘Golmaal Returns’, ‘Kambakkht Ishq’, ‘Raakh’, ‘Fight Club-Members Only’, ‘Zameen’ and ‘Awara Pagal Deewana’. Amrita started her Bollywood career with the movie ‘Kitne Door Kitne Paas’ opposite Fardeen Khan.