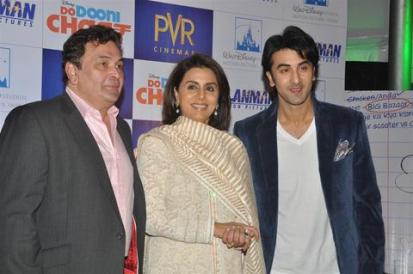 Veteran Bollywood actors Rishi Kapoor and Neetu Kapoor acted together in the year 2010, in a movie called ‘Do Dooni Chaar’. The couple will now also be featuring in the upcoming movie ‘Jab Tak Hai Jaan’. According to our sources, the upcoming movie will be directed by Abhinav Kashyap.

In the new movie, the couple will be co-starring with their son Ranbir Kapoor, if popular reports are to be believed. The upcoming flick has been titled ‘Besharam’ and Ranbir will be playing the lead role in the film. Earlier Kashyap had declined Salman Khan’s ‘Dabangg 2’ project, as a result the filmmaker had to put in a lot hard work and effort to begin his ‘Besharam’ project.

Earlier, there were reports that Kashyap was backing out of the project due to budget issues, but sources are now revealing that everything has been put in place. Sources from the production unit said that Rishi was narrated the whole script by Abhinav and after hearing his part, the veteran actor agreed to the project. However, Neetu is yet to hear the script.

Rishi and Neetu’s earlier film ‘Do Dooni Chaar’ was about a middleclass family, who struggles to buy a car due to many constraints.