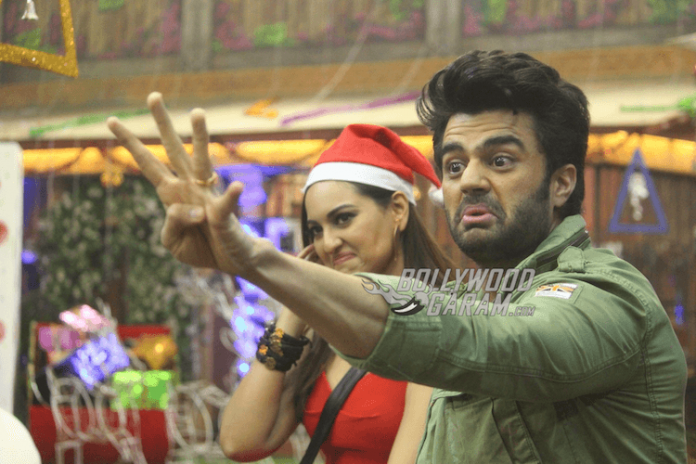 A day full of tensions, twists and turns for Bigg Boss contestants on Sunday named ‘Weekend ka Vaar’, was turned into a fun day by Sonakshi and Manish as they visited the house to shoot for a Christmas special episode on December 24.

Sonakshi Sinha and television anchor Manish Paul had a great time with the contestants Salman Khan.

Both actors came in with Christmas gifts and goodies and played some pretty interesting games with the contestants.

Sonakshi Sinha looked gorgeous in her pretty red dress and charmed the audiences as well as the contestants.

After an entertaining game of Fish Bowl, which required every contestant to secretly write something about another contestant, they moved on to play a round of Spin the Bottle!

The Weekend Ka Vaar Christmas special episode aired on Sunday, December 25. Here are a few highlights from the episode –

This week no eliminations were made as a Christmas present to all Contestants. However, host Salman Khan did make some important announcements –

Swami Om, Monalisa Antara and Manu Punjabi were declared safe from nominations next week. While VJ Bani and Gaurav Chopra will stay nominated for the elimination round next Sunday.

That’s from the Bigg Boss Season 10 Christmas Special Episode. Stay tuned for more updates on what goes on in the house!