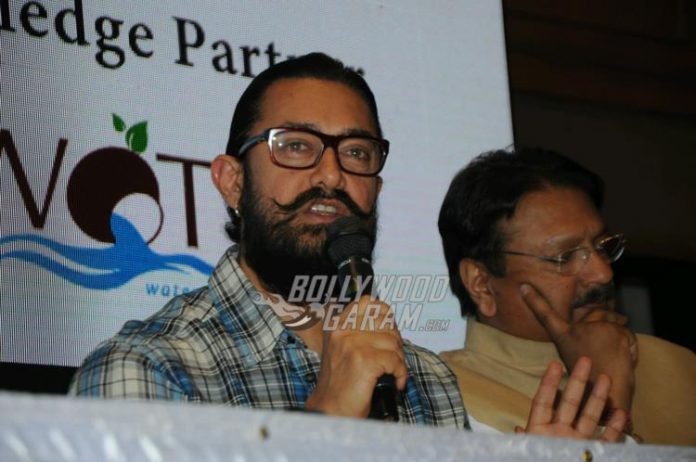 Actor turned producer Aamir Khan is not just a good filmmaker and actor but has also addressed the water problem in the state of Maharashtra. After the success of the Paani Foundation that brought water in three districts of Maharashtra, the actor is looking forward to expand the campaign. Aamir Khan’s Foundation launched Satyamev Jayate Water Cup’s second edition in about thirty talukas of the state at a press event in Mumbai on January 3, 2017.

The Press event also saw the presence of Chief Minister of Maharashtra Devendra Fadnavis, Kiran Rao, Reena Dutta and others. The occasion also launched a special music video created for the Water Cup. The music for the song has been composed by Ajay-Atul of ‘Sairaat’ movie fame.

The Satyamev Jayate Water Cup will see villages competing against each other in terms of the best watershed management and water conservation in the period of the contest. The contest will begin from April 8, 2017 to May 22, 2017. The top three villages of the state will get a cash prize of Rs. 50 lakhs, Rs. 30 lakhs and Rs. 20 lakhs respectively. The competition is open for all talukas for participation and is thus based on self-selection. The last date for the villages to enter in the competition is January 31, 2017.

Aamir Khan is currently enjoying the super success of his movie ‘Dangal’ which hit the theatres on December 23, 2016. The movie is about a father and daughter relationship and will see Aamir Khan play the role of an Indian wrestler. ‘Dangal’ is a biopic of the real life wrestler Mahavir Phogat, who encouraged his daughters in the male dominated sport.