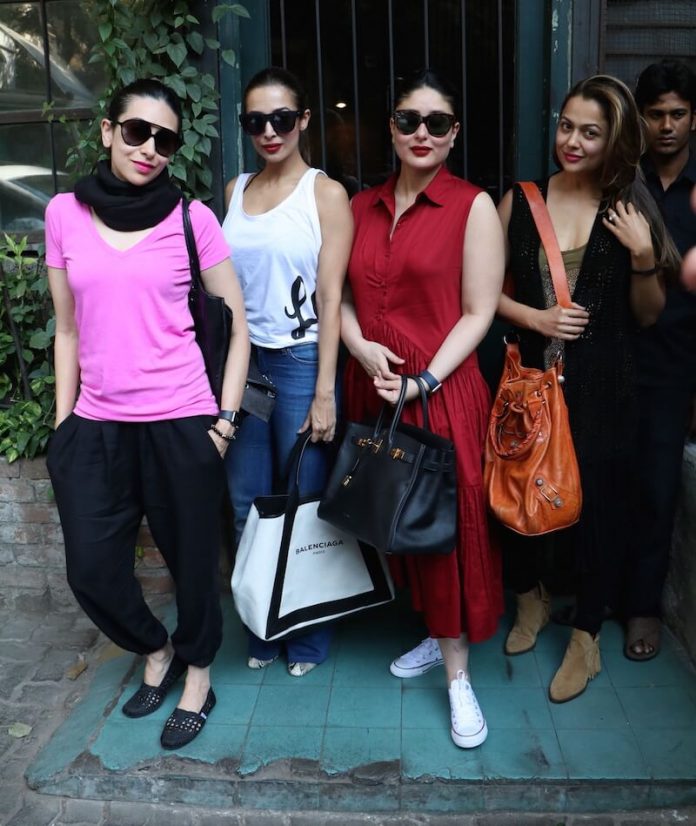 Kareena Kapoor was spotted leaving a restaurant in Bandra after enjoying a quite lunch date with sister Karishma Kapoor and friends Malaika Arora Khan and Amrita Arora on January 7, 2017.

Kareena Kapoor, as usual looks stunning in her red dress, paired with white sneakers. She was kind enough to pose for the paparazzi, Disney Princess style!

Kareena was last seen in Udta Punjab in a supporting role. The actress has been away from the screen for a while and her fans are waiting for her appearance on the golden screens soon.

Kareena will be seen in a lead role opposite Sonam Kapoor in Veere Di Wedding, which is  directed by Shashanka Ghosh and produced by Ekta Kapoor and Rhea Kapoor. Veere Di Wedding is scheduled to release in the later half of 2017.

They even did a mini photoshoot for us post lunch as they were leaving the restaurant.

Malaika Arora Khan was later spotted leaving from Kareena Kapoor’s residence on January 15, 2017 after their quite lunch date, a week earlier. She payed a visit to the new mom and her baby boy Taimur Ali Khan Patuadi at the Khan’s residence in Bandra.

The Actress and model sported a casual grey tank top with cargo pants, paired with a red handbag.

The ever so camera friendly Malaika was happy to pose for shutterbugs as she entered her car!

Stay tuned for latest updates on Kareena Kapoor only on Bollywood Garam!