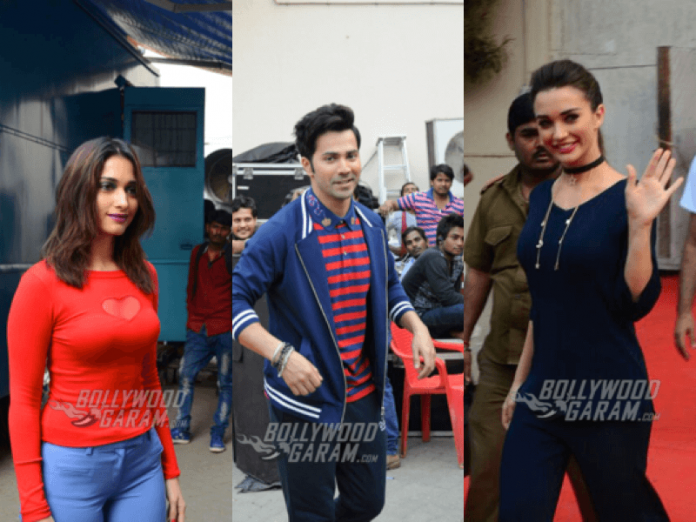 Today was a happening day at Mehboob Studio as several stars shot for their respective photoshoots, ad films and movies at the studio. Enjoy this live feed straight from the studio as we update pictures as they get clicked!

Actress Amy Jackson was spotted at a shoot today sporting a navy blue ensemble and a pretty choker. Check out all her pictures below –

Third look of Amy Jackson for her shoot at Mehboob Studio.

Next we have dashing Varun Dhawan for you – who’s always game for a pose or two when spotted by the shutterbugs!

This is his first look at the shoot today, sporting a blue jacket with a stripped blue-red T-shirt and navy blue track pants. Our favorite from his look is the brown sneakers!

And here’s Varun Dhawan striking a rather dramatic pose, ready to unveil his second look for the shoot –

Ta-da! Revealing a bright yellow T-shirt with a Tiger graphic, teamed up with black jeans, a black shrug and classic black and white sneakers.

There’s the charming look specially for the cameras!

And here’s the third look of Varun Dhawan from his shoot the studio.

The complete look includes a white Shirt over a white top, paired with grey track pants and grey suede sneakers with a brown highlighted base.

Aalim Hakim (in the background)

We even managed to get a glimpse of celebrity hairstylist Aalim Hakim at Mehboob Studio. Looks like it was a field day for Aalim as he spotted having a serious discussion with his crew and team.

We love Aalim Hakim’s light brown-yellow loafers! And yes, the starbucks coffee drinker – Varun Dhawan too looked dapper in his formal suit. We wonder if that’s how he arrived at the venue or if that’s for a shoot?

Turns out actress Tammanah Bhatia was at Mehboob studio today for an exclusive photoshoot for Filmfare Magazine’s February edition. We spotted her heading out from her dressing room and she can be seen sporting one of her looks from the photoshoot here –

Here’s a candid picture of Tammanah as she sports one of her looks from Filmfare’s Magazine shoot with the cute red top and blue pants.

Here’s Tammanah Bhatia calling it a day as the Filmfare Magazine photoshoot wraps up and the actress heads home with her mother, Rajani bhatia, who attended the photoshoot.

Today was our lucky day as we spotted renowned film critc Anupama Chopra at the studio as she arrived in her car.

The ever so camera friendly Anupama sported a lose fit black maxi dress and looked rather cute as she paired it with an olive green bag and red bailey shoes.

That’s all from Mumbai’s landmark Mehboob Studio today. Stay tuned for Garam updates on your favorite stars only on Bollywood Garam!