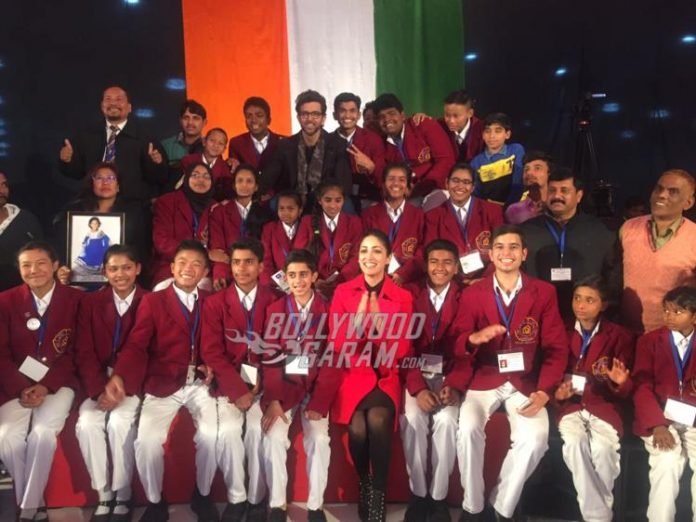 Actors Hrithik Roshan and Yami Gautam promoted their upcoming movie ‘Kaabil’ in a unique way. The actors spent time with the winners of the Bravery Award in New Delhi on January 21, 2017.

Yami and Hrithik were seen in their winter outfits and looked great while promoting their flick ‘Kaabil’ which is all set to hit the theatres on January 25, 2017. Twenty five children from all over the country have been selected for the prestigious Geeta Chopra Award.

The selected children will receive the award by the hands of the Prime Minister in the Capital on January 23, 2017 and will also participate in the Republic Day parade on January 26, 2017. Yami and Hrithik interacted with the children and congratulated them for their bravery.

Upcoming movie ‘Kaabil’ is directed by Sanjay Gupta and is produced by Rakesh Roshan. Hrithik and Yami will be seen playing the role of a blind couple. The movie also stars Ronit Roy and Rohit Roy and the audience will also get to see Urvashi Rautela in a special item song. Music for the movie has been composed by Rajesh Roshan. Makers of ‘Kaabil’ are also releasing the movie in Telugu and Tamil dubbed versions. Stay tuned for the review of the much awaited movie.
Photo Credits: Viral Bhayani