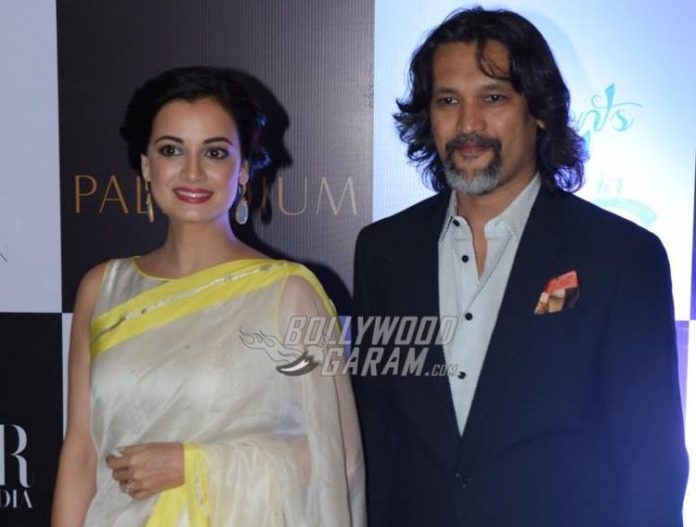 Bollywood actress Dia Mirza appeared at an event by Jatin Kampani supporting art and photography in Mumbai on January 25, 2017. Mirza was at the event with husband Sahil Sangha to show support to Kampani who is an acclaimed photographer and a close friend.

The actress looked stunning in a raw silk sari with a lemon yellow border by contemporary Indian brand Raw Mango. The brand specializes in using traditional techniques on hand woven textiles. The Bollywood diva completed her look with minimal jewellery and a beautiful smile.

Dia defied all of nature’s rules by looking not a day older since she first entered Bollywood as a beauty pageant winner. Though the actress has mostly kept out of the limelight since settling down after marriage, these rare appearances of hers are photography gold! She is considered as one of India’s most beautiful women, and has appeared on several magazine covers and among celebrity lists of the hottest celebrity women in the country. We hope to see more of Dia Mirza in the coming year!

On the work front, the actress was last seen in the movie ‘Salaam Mumbai’ which was a Persian-Indian movie released in November, 2016. Dia made her debut in Bollywood with the movie ‘Rehna Hai tere Dil Mein’ opposite actor R. Madhavan. The movie did an average business at the box office.

Dia then did movies like ‘Deewanapan’, ‘Tumko Na Bhool Payenge’, ‘Tehzeeb’, ‘Dum’ and ‘Kyun…Hogaya Na’. The actress got married to businessman Sahil Sangha in October 2014 at a farmhouse at Chattarpur in the outskirts of Delhi. Apart from Hindi movies the actress has also appeared in a Bengali movie ‘Paanch Adhyay’ for which she got the Best Actress award at the Jaipur International Film festival.