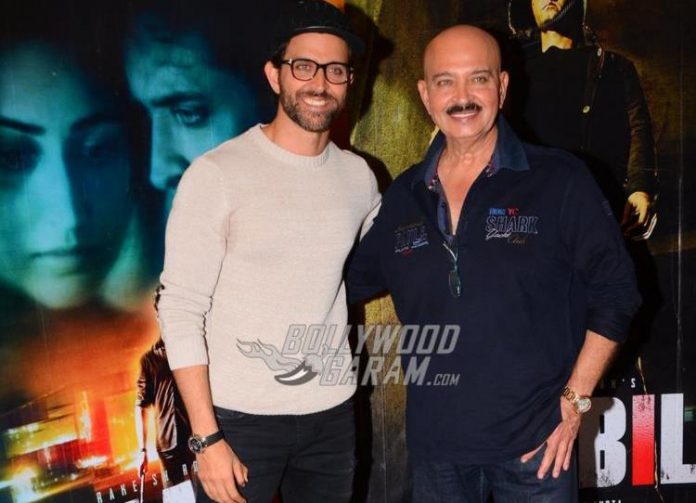 Bollywood star Hrithik Roshan and father Rakesh Roshan promoted their upcoming movie ‘Kaabil’ in Mumbai on January 25, 2017. Rakesh, who is the producer of the movie is of all, was all smiles and excited for the release of the movie.

‘Kaabil’ hit the theatres on January 25, 2017 and is running successfully all over. January 25, 2017 also saw the release of Shahrukh Khan starrer ‘Raees’. Rakesh at the promotions was asked if he would watch ‘Raees’ to which he answered that he would not be watching ‘Raees’ but would rather watch ‘Kaabil’ again. This has hinted that everhthing is not well between the Roshand and the Khans.

But Hrihtik on the other hand took his Twitter account to share a message for Shahrukh and wrote, “Dear @iamsrk today as a mentor Im sure u will inspire me yet again with #Raaes and as a student I hope you are proud of me with #Kaabil.” Shahrukh and Hrithik are friends in the industry while Shahrukh has worked with Rakesh in some of the classic movies like ‘Karan Arjun’ and ‘Koyla’.

Veteran Bollywood actor and producer, Rakesh Roshan was there to support his son, who was seen sporting Vans canvas shoes with paintings of Marvel’s Deadpool. Though Hrithik’s movie coincides with the release of Shahrukh’s Raees, both movies seem to be doing pretty well at the box office. Hrithik’s ex-wife, Susanne has also been openly supporting him, arriving for the premier of the movie along with their two minor sons. So, things seem to be looking up for the actor!