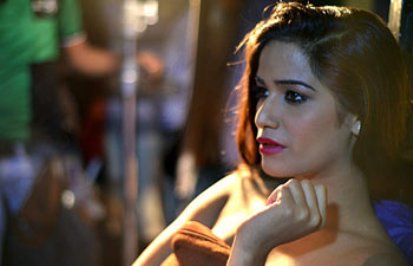 After a lot of speculation, ‘strip queen’ Poonam Pandey has started shooting for her debut Bollywood movie ‘Nasha’. According to our souces, the actress shot her first scene, which was a bedroom scene.

For long, the actress was in the news in regards to her debut movie, after she shot to fame with her strip claims for the Indian cricket team. Pandey is already popular on Twitter and her own website, where she regularly posts raunchy videos and pictures for her fans.

Poonam’s earlier promise of stripping for the Indian cricket team could not be fulfilled, but later the actress claimed that she would strip for Shahrukh Khan’s cricket team Kolkata Knight Riders. Poonam then kept her promise and posted a nude picture of her on Twitter.

The 21 year old model had also appeared on the Kingfisher Calendar contest, but could not get much attention.