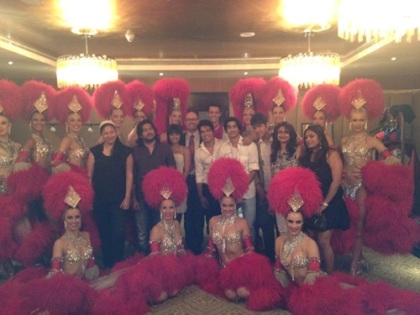 The world famous Moulin Rouge from Paris recently dropped in for a short appearance on an episode of the youth show ‘Dil Dosti Dance’ on Channel V. The troupe performed the French Can-Can dance on the show.

The dancers were beautifully dressed with bright colors, feathered headgear, ruffled skirts and the tinkling of rhinestone jewelry. Prem Kamath, the Channel V Executive Vice President & General manager said that they were really pleased with the outcome of the integration.

Kamath added that Moulin Rouge had been spectacular in the episode and that they have also complimented D3 to the hilt. He also said that they added plenty of quality to the sequence. The dancers included 14 women and three male acrobats, who were handpicked for the tour by their ballet mistress.

The group performed the popular item number ‘Chikni Chameli’ which was choreographed by the cast of D3, Amar Singh and Shantanu Maheshwari. After the shoot concluded, the cast of the show and the Moulin Rouge group danced away on the sets of D3. The episode is expected to be aired during the second or third week of November, 2012.

Dil Dosti Dance is a show which is based on the youth and their ambitions, as they struggle to achieve their goals.