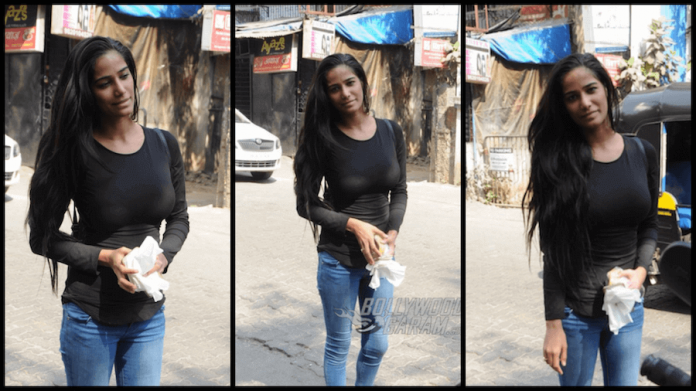 Poonam Pandey Was Snapped in Bandra, Looks Like She’s Back From Her Stint at Paris Fashion Week 2017!

Bollywood Garam finally caught up with model and starlet Poonam Pandey as she returned from Paris Fashion Week. She was snapped in Bandra yesterday, January 30, 2017 and was happy to pose for the shutterbugs!

The Nasha actress was recently spotted attending the Paris Fashion Week from January 18 – 22 and live tweeted her entire experience! The starlet grabbed headlines in 2012 when she offered to bare it all for motivating the Indian National Cricket Team to bring home the World Cup and flooded her twitter account with explicit photos of herself. But after appearing a movie or two, she soon faded away and became just another name.

This recent, well clad avatar of the dusky model is a pleasant surprise and frankly, a treat to the eyes! She was spotted wearing a tight fitting plain black t-shirt with jeans, sans make-up and chose to let her tresses down.

Stay tuned for latest updates on Poonam Pandey only on Bollywood Garam!