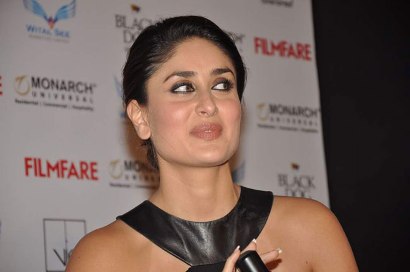 Bollywood actress Kareena Kapoor has played various roles in the Indian Film Industry, from a prostitute to the girl next door. Now the ‘Agent Vinod’ actress is preparing for yet another role for her upcoming movie ‘Satyagraha’, in which she will be playing the role of a journalist.

After Diwali celebrations conclude in the country, the ‘Jab We Met’ actress will begin shooting for the Prakash Jha flick. Bebo, in the movie, will be seen as an international TV correspondent. This will also be Kareena’s first full-fledged role after her wedding with actor Saif Ali Khan last month.

However, the ‘Bodyguard’ actress also shot for an item song in the upcoming movie ‘Dabangg 2’ earlier this week. At present, the actress is working on her look for the new movie, which is said to be that of an assertive and self assured woman.

According to our sources, the ‘Chameli’ actress will be seen in chic and western outfits, which will include casuals, A line skirts and wide legged trousers in fluid fabric. Reports have said that the actress will be travelling to Dubai with her stylist to pick up some off-beat and chic attire, which will complete her journalist look for the new movie. The filmmakers are currently writing the script and the outline of Kareena’s character is also being decided.