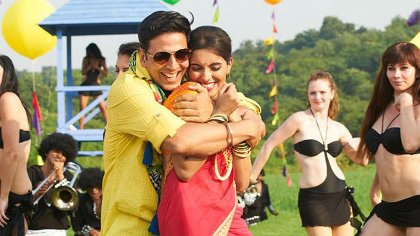 Bollywood star Ajay Devgn and production house Yash Raj Films were recently at logger heads over the exhibition of their respective films ‘Son Of Sardar’ and ‘Jab Tak Hai Jaan’. Now that issue has become a thing of the past as a new war between Aamir Khan’s thriller movie ‘Talaash’ and Akshay Kumar’s ‘Khiladi 786’ seems to be heating up.

Exhibitors however are not looking to jump into any messy situations and are holding off on signing a two-week contract for screening either of the movies. D Y Patni, a prominent exhibitor from the Gujarat-Saurashtra circuit said that they are waiting to get out of one situation and only then will they think about the next.

Patni added that no film or business is worth all the confusion that was recently caused and now no one is going to sign a contract. On the other hand, Hemant Shah of Tilak Exhibitors said that if the collections of Talaash are good then they would continue, as running the film would depend upon certain conditions. Shah added that there will not be any prior commitment to any film and that they will take films based on merit.

The distributors have said that the Delhi bookings for Talaash were done for June, 2012, as it was to be released at that time. Some exhibitors would need to go with that as they have signed, however from now on, the general consensus is that no prior two-week bookings will take place.