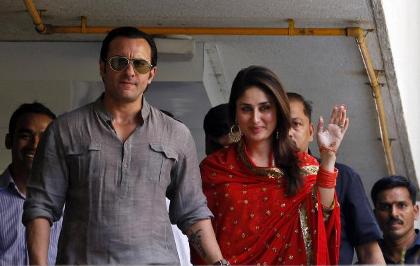 Bollywood actress Kareena Kapoor, after a five year long relationship with Saif Ali Khan, finally married the actor last month. The ‘Jab We Met’ actress expressed that she is fortunate and happy that her five-year-long relationship got converted into marriage.

The ‘Omkara’ actress also said that she also loves that fact that Saif has never taken her lightly. At present, the Begum of Pataudi is in a very happy phase and said that the couple compliment each other in many ways.

Kareena and the ‘Hum Tum’ actor also know how to strike a balance in their relationship. The actress revealed that her husband is very liberal, while the ‘Chameli’ star tends to be more traditional. Bebo added, “And if I am very modern, then he kind of becomes protective. He is also someone who will always give me the right advice. When I ask Saif something he doesn’t take it lightly because he knows if I am asking him something; it must be very important. I take his words very seriously.”

It was only when Saif and Kareena were getting ready for their wedding that it was revealed that they were living together for many years, with the permission of their parents. Kareena fell for the ‘Dil Chahta Hai’ actor on the sets of the movie ‘Tashan’ when he was shooting for a shirtless shot.