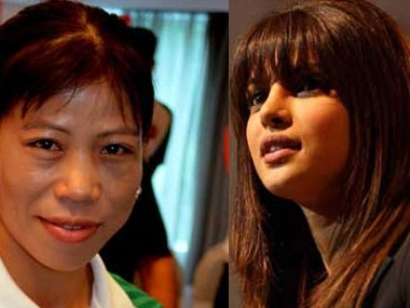 After earlier speculations, recent reports have confirmed that Bollywood actress Priyanka Chopra will be the one who will play the role of Mary Kom in the upcoming biopic about the Indian boxer. Sources from the production unit have said that Priyanka has been finalized for the Sanjay Leela Bhansali flick based on the Olympic medalist’s life.

Further reports have said that the ‘Barfi’ actress will start preparing for the role in the month of January, 2013. The project is also expected to go on floors early next year. Popular sources opine that Priyanka has been in talks with the production house for quite some time and was trying to work out suitable dates to begin shooting.

Now finally it seems like things have worked out and the actress is on board to play the lead in the film. A workshop on the project is expected to begin with Priyanka and Mary. Sources have also claimed that since the movie is about Mary, there will not be any male lead in the film.

Earlier, the filmmaker wanted to cast Priyanka in a Gujarati Romeo-Juliet movie, but that did not workout and Chopra was keen to do the film on Mary Kom. Even Bhansali thought that the actress would be the perfect one to play the role of the 5-time world champion female boxer.