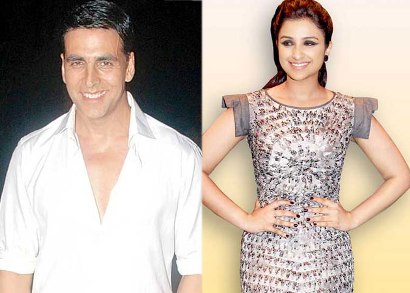 While the makers of the Tamil movie ‘Thupakki’ are all set to remake the flick in Hindi, the cast for the film has been finalized as well. Akshay Kumar was already finalized for the remake and now actress Parineeti Chopra has been cast as the leading lady.

Earlier, other actresses like Deepika Padukone and Katrina Kaif were being considered for the role. However, the producers of the Thupakki remake thought that since Chopra has not yet been cast opposite Akshay she should fill the role, as this will help to add novelty to the movie. Sources from the production unit said that Parineeti has been finalized for the role, but Priyanka does not have any clue about it.

The part was earlier offered to Diana Penty, but when Akshy came to know that Penty is from the same agency with which he had problems earlier, he refused to work with her. Problems with the agency started when Nargis Fakhri was signed for ‘Khiladi 786’. Fakhri had also signed a three movie deal with Akhay’s production house, but due to some differences in the contract the ‘Rockstar’ actress could not work in the movie and Asin was brought in.

The movie will be directed by A R Murugadoss and will be an action thriller flick.