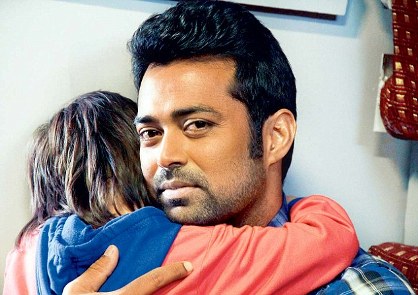 Indian tennis star Leander Paes is all set to make his Bollywood debut. Paes has already begun shooting for his upcoming movie, which has been named ‘Rajdhani Express’.

Leander was seen shooting for an important scene with co-stars Gulshan Grover, Sudhanshu Pandey, Priyanshu Chatterjee and debutant Puja Bose. The movie will also have Jimmy Shergill and Sayali Bhagat as cast members.

The movie will be directed by Ashok Kohli and is a thriller which takes place on the Delhi-Mumbai based Rajdhani Express. Leander, in the movie will be seen in the central role of a gunrunner who has to deliver a consignment.

The story of the movie revolves around the character Kesav, who steals a gun to escape on the train. The story then takes an interesting twist as suspense builds and Kesav gets stuck with his co-passengers. Sources from the production unit said that almost all the scenes in the movie will be shot on a train. Earlier, there were reports that Leander will be playing the role of a terrorist, but the producers refused to confirm the news. Leander was initially supposed to make his debut opposite Ameesha Patel, but that could not be materialized.