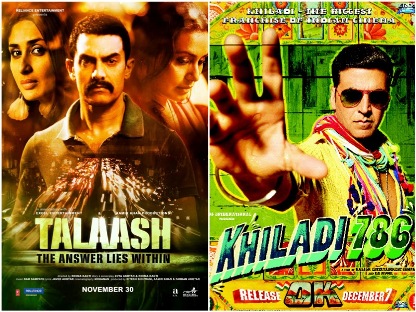 Bollywood movie ‘Khiladi 786’, which marked the return of actor Akshay Kumar to the Khiladi genre turned out to be a big disappointment at the box office. The movie was expected by many to overturn the collections of Aamir Khan’s ‘Talaash’.

The Akshay Kumar starrer has landed in second place on the international business charts during its first weekend, while the Aamir Khan starrer claimed the first spot in its second weekend. ‘Khiladi 786’ has done very poor business at the USA Box Office as well during its first weekend there, as compared to the second weekend collection of ‘Talaash’, which as has once again topped the charts.

Aamir Khan’s movie has collected $4,49,195 from roughly 161 screens, which took its 11 day total to Rs. 13.05 crores. This puts ‘Khiladi 786’ in the second spot and takes its first weekend collection to Rs. 1.25 crores from about 114 screens in the country. The Kareena Kapoor starrer ‘Talaash’ has also upstaged ‘Khiladi 786’ at the Australian Box office. The suspense-thriller collected A$ 1,11,300 from about 23 screens and took its 11 day total to Rs. 3.21 crores. The same position was also seen at the New Zealand box office.