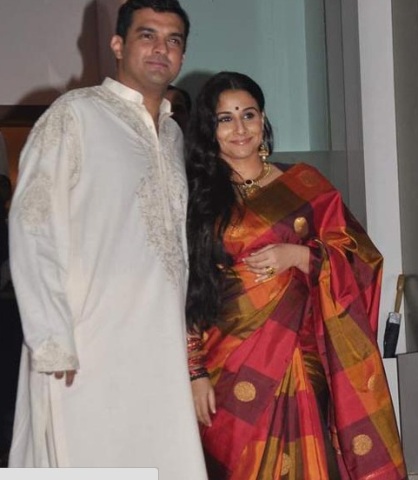 After being silent about her wedding for a long time, Bollywood actress Vidya Balan and beau Siddharth Roy Kapur are all set to get hitched on December 14, 2012. The celebrations for the wedding have already begun with the Sangeet Ceremony on December 11, 2012, at Vidya’s residence at the Khar area in Mumbai.

Surprisingly, the to-be wedded couple happily posed for the cameras and the wedding ceremonies are expected to be held in South Indian as well as Punjabi styles. The actress on the day of Sangeet ceremony was seen in her traditional Kanjeevaram style sari with heavy gold jewellery.

Siddharth was seen in a white embroidered kurta. The ceremony was attended by Vidya’s parents Saraswathy and PR Balan, actress’s Priya and brother-in-law Kedar, who were seen busy with the arrangements for the event.

Reports have said that Balan and Siddharth will be having a temple wedding at the Sri Subramania Samaj temple in Chheda Nagar in Chembur on December 14, 2012. Balan is a Tamilian and Siddharth is a Punjabi, so a part of the wedding ceremony is expected to take place at the Kapur residence in Cuffe Parade as well. Friends of the couple said that the pair would announce their wedding when they were comfortable doing so.