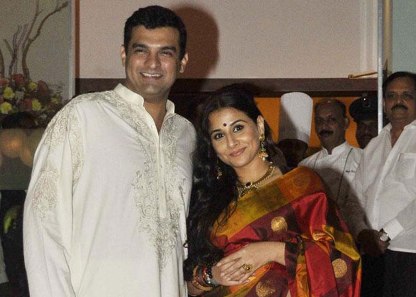 BollywoodGaram.com: Bollywood actress Vidya Balan and UTV head Siddharth Roy Kapur are now husband and wife, after they tied the knot on December 14, 2012. The wedding took place at the Green Mile Bungalow in the Bandra area of Mumbai.

Earlier it was reported that the couple will have a temple wedding in Chembur, but this did not happen. The wedding took place in the morning and was conducted in South Indian style. Reports state that Punjabi rituals will also be performed as Vidya is a South Indian and Kapur is a Punjabi.

Vidya was seen wearing a mustard sari, which was probably gifted by her mother-in-law and was handpicked by her favorite designer Sabyasachi. The actress had flowers in her hair and also wore some of her mother’s jewelry for the event. After the wedding ceremony, the ‘The Dirty Picture’ actress reportedly wore toe rings on both her feet, which is a part of the Tamilian tradition. The ‘Kahaani’ star was also seen wearing the traditional ‘Thaali’, which is a woven yellow thread, showcasing pictures of Lord Balaji and Ambana.

After the private wedding, the couple intend to send sweets to people from the film industry. The wedding celebrations began on December 11, 2012, with a Sangeet ceremony, which was attended by close friends and family. The only celebrity who was invited for the ceremony was actress Rekha.