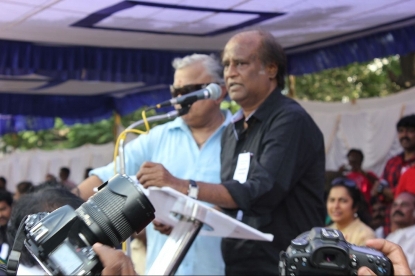 South Indian superstar Rajinikanth has joined a hunger strike, which is being led by a section of artists from the Tamil film and television industry. The actor said that there must be a tough law to book tax defaulters and has joined the movement to put this point across.

Rajinikanth, who has acted in some of landmark movies in Tamil film industry as well as Bollywood said, “If there is a tough law to book tax defaulters so much money could be mobilized” The day-long protest was also joined by other superstars like Sarathkumar, Vijay, Radhika and Suhasini.

The protesters have also demanded that directors, artists and choreographers should be exempted from paying service tax and the excess of 12.36 percent must not be applied to them. This is because the service tax on the entertainment industry was partially lifted and few years ago, which exempted exhibitors, producers and distributors from paying these taxes.

For January 2013, all shoots have been cancelled and theaters across the state will remain closed until evening. The theaters will be playing only night shows according to industry sources. The strike has also been joined by actors, directors, technicians, producers and theater owners.