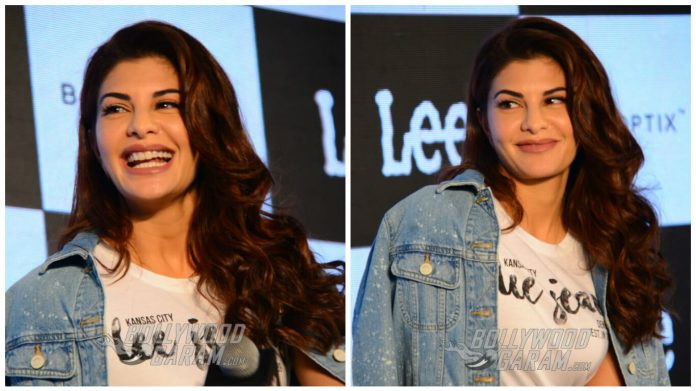 Jacqueline Fernandez is the new face of Lee

The gorgeous Jacqueline Fernandez was snapped at the press conference for Lee Jeans on February 15, 2017.

The actress showed off her curvaceous figure with blue denim jeans and a white printed t-shirt from Lee. She seemed to be in a fun and a playful mood when she posed for the cameras, and as usual she looks pretty with her stylish personality.

The stunning Bollywood actress has been known for her charm and beauty and is a favorite of the youth of the country. Lee wanted someone with a vivacious personality to be the face and brand ambassador for this particular line, that is targeted towards the younger lot. And it was she who perfectly fit the bill. The latest line from Lee is replete with edgy and casual styles, mostly denims for everyday wear. The line includes relax fit jeans, denim jackets and t-shirts. As displayed by Jacqueline, you can wear the line for on a regular weekday, for parties over the weekend and even when you’re relaxing and taking some time off with mindful meditation.

Apart from her latest endorsements, Jacqueline was last snapped by Bollywood Garam with Siddharth Malhotra at Koffee with Karan.

Enjoy the Exclusive Gallery of the Event with Jacqueline Fernandez:

The Actress was last seen on screens with Tiger Shroff in the movie Flying Jatt. It was a Superhero action film co-written and directed by Remo D’ Souza and produced under the banner of Balaji Motion pictures. the film was released on 25 August, 2016.