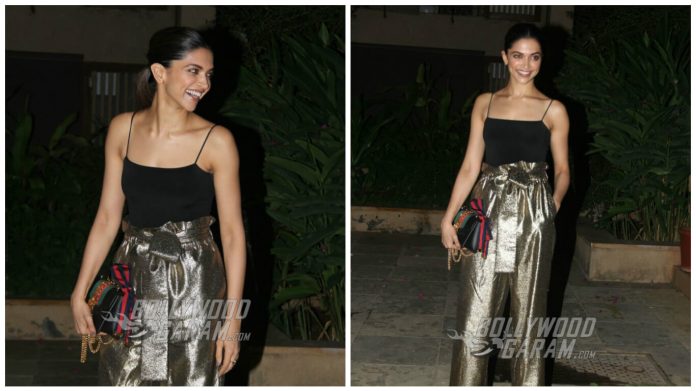 The stunning Deepika Padukone was spotted at Shahid Kapoor’s birthday bash which was celebrated a week in advance and was hosted by his wife Mira Rajput.

The entire cast of Padmavati was spotted at the bash including. Ranveer Singh, Deepika Padukone and Shahid kapoor play lead roles in the upcoming historical drama. Padmavati  is directed by Sanjay Leela Bhansali and produced by Vaicom 18 Motion Pictures and Sanjay Leela Bhansali himself. The movie is scheduled to release on November 17, 2017.

Director of Shahid Kapoor’s upcoming movie Rangoon, Vishal Bharadwaj was also spotted at his birthday bash. Shahid Kapoor will be playing lead roles with Saif Ali Khan and Kangana Ranaut in Rangoon which releases on February 24, 2017.

The actress looked gorgeous in golden pants paired with a simple black top and pointed black heels. She chose to accessorize with just a shoulder bag and tied her hair up, which complimented the entire look. Deepika definitely stole the limelight at Shahid’s birthday bash with this one!

Stay tuned for latest updates on your favorite Bollywood celebrities only on Bollywood Garam!