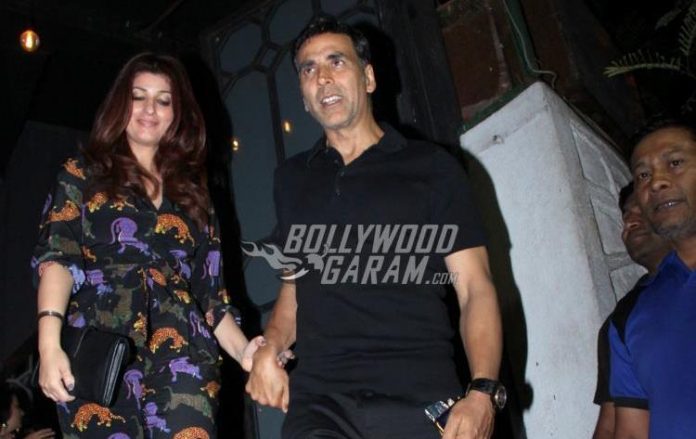 The 8th season of the celebrity dance show ‘Nach Baliye’ has been announced. There were reports that celebrity couple, Akshay Kumar and wife Twinkle Khanna were approached for judging the show.
However, the Bollywood couple has turned down the offer due to work commitments. ‘Nach Baliye’ is a dance show where real life celebrity couples participate on the show to win the title of the best dancing couple. Since the show has couples, the makers thought it would be best to have a celebrity couple to judge the show.
Akshay and wife Twinkle recently appeared on the show ‘Koffee With Karan’ hosted by Karan Johar. The two had a great time and showed off some great chemistry. Akshay has earlier hosted many shows on TV including ‘Khatron Ke Khiladi’, ‘Masterchef India’, ‘Seven Deadly Arts With Akshay Kumar’ and ‘Dare 2 Dance’. Twinkle was last seen in the movie ‘Love Ke Liya Kuch Bhi Karega’ and has now turned in to an author. The actress has released two books so far, ‘Mrs. Funny Bones’ and ‘The Legends of Lakshmi Prasad’.
Akshay is currently enjoying the success of his movie ‘Jolly LLB 2’ which also stars Huma Qureshi and has recently finished shooting for the upcoming movie ‘Toilet – Ek Prem Katha’ opposite actress Bhumi Pednekar.

The celebrated couple have been together for nearly two decades and are still crazy about each other. They were most recently spotted spending quality time together for Valentine’s Day. Though each face work commitments, they make time for each other, and go out on dates to keep the flame alive. They have two children together, and both work, but their commitment to each other can be easily seen whenever they go out.

It is not yet known who will judge the show, but maybe Saif Ali Khan and Kareena Kapoor should do something together, no?
Photo Credits: Viral Bhayani