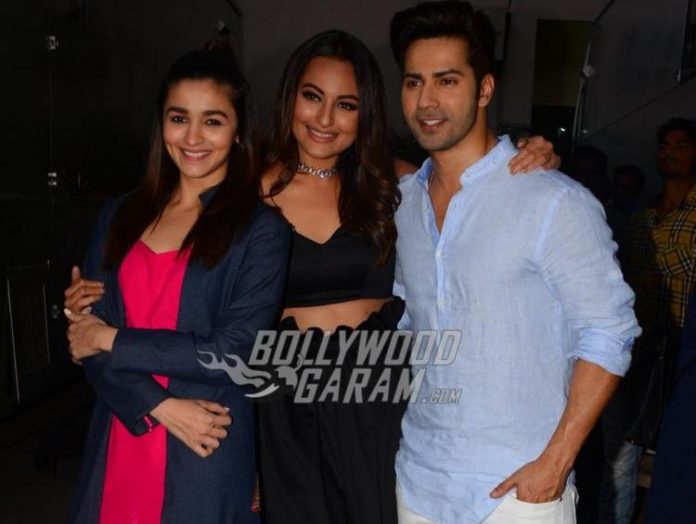 See who we bumped into at Mehboob Studios yesterday!

Work has always remained priority for our B-town actors and Bollywood Garam caught up with quite a few of them at the iconic Mehboob studios on March 1, 2017.

Actor Saif Ali Khan is now concentrating on work after a paternity leave. The ‘Agent Vinod’ actor looked cool in casuals with a V neck t-shirt, jeans and brown shoes.

The actor is currently enjoying the success of his movie ‘Rangoon’ which also starred Kangana Ranaut and Shahid Kapoor.  Saif Ali Khan is currently working on his next project Chef. Its a remake of a Hollywood movie and is due to hit theatres worldwide on July 14, 2017.

Seems like Sridevi and daughter Jhanvi Kapoor stopped by at Mehboob Studios to pay Boney Kapoor a brief visit!

Jhanvi Kapoor is all set to make her Bollywood debut soon and looked chic in a black dress paired with white sneakers and a black jacket.

Sonakshi is currently filming for the upcoming movie Noor which is an adaptation of a popular novel ‘Karachi, You’re killing me’ by Pakistani author – Saba Imtiaz. The movie is scheduled to hit the theatres on April 27, 2017 and is directed by Sunhil Sippy. Noor is produced by Bhushan Kumar, Priya Gupta, Vikram Malhotra and Shikhaa Sharma.

Actress Sonakshi Sinha came across the ‘Badrinath Ki Dulhaniya’ actors Varun Dhawan and Alia Bhatt and posed for the shutterbugs together. Alia and Varun are currently on a promotional spree and are making the most of the time just before the release of their movie.

Alia and Varun sported two looka while shooting at the studio. In the first look we saw Alia in a pink and blue outfit and Varun in a sky blue shirt paired with white denims.

In the second look we saw Alia in a nude free flowing dress paired with a white jacket, while Varun Dhawan sported a maroon t-shirt paired with black pants.

Kangana seemed in a jolly mood as she exited one of the studios after her shoot. She looked lovely in a floral printed kurta paired with blue palazzos and a blue, white striped jacket. She even had a moment as she tripped over the uneven floor, but made up for it with a million dollar smile!

Stay tuned for latest updates on your favorite celebrities only on Bollywood Garam!