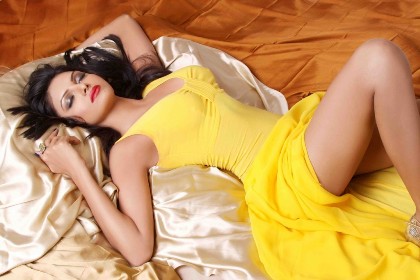 Bollywood actress Sherlyn Chopra has done it once again. The actress and model has managed to create some hype around her new movie by posting a video (sans clothing) from her upcoming movie ‘Kamasutra 3D’. Chopra is seen posing bare in the video clip that she posted on January 19, 2013.

As soon as the pictures were posted, reactions poured in from her fans on social networking site Twitter. The first look of the movie was unveiled at Goa Film Bazaar. The international movie has been directed by Rupesh Paul and is based on Vatsyayana’s Kama Sutra, which is the sacred Indian intimacy manual. The story of the movie is set against the back drop of the real historical story and will be produced under the banner of RPPL.

This will also mark the first major role for Sherlyn. Earlier, the actress has done roles in Bollywod movies like ‘Raqeeb’ and ‘Dil Bole Hadippa’. Chopra recently became the first Indian actress to pose for the international magazine Playboy. The filmmaker had earlier announced his plans to make the movie during the premiere of his maiden Hollywood venture Saint Dracula 3D, at the Cannes film festival.

Paul added that he plans to premiere Kamasutra 3D at the same international film festival in 2013.