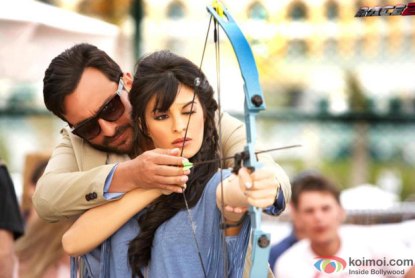 Bollywood movie ‘Race 2’, which has been directed by Abbas-Mustan, has become the first movie of the year 2013 to enter the Rs. 100 crore club. So far the movie has grossed Rs. 100.45 crores and was made with a budget of Rs. 60 crores.

The movie was released on January 25, 2013 and earned Rs, 100.45 in just two weeks. Gaurav Verma, the director theatrical distribution in India for Studios Disney UTV, said in a statement, “We are glad that Race 2 is continuing its great run at the box office and holding its position throughout”.

Verma added that they had complete faith in the movie and were extremely happy that the audience have liked the film and have made it possible for the movie to reach this position.

The movie has been co-produced by UTV Motion Pictures and Tips Music Films. Race 2 has an all-star cast including Saif Ali Khan, Deepika Padukone, Anil Kapoor and Jacqueline Fernandez and Ameesha Patel. The movie also has Bipasha Basu, who took over her role as Sonia in a special appearance. The movie becomes the third-biggest release in India after ‘Ek Tha Tiger’ and fans all across the country are thronging to theaters to catch a glimpse of their favorite stars in action.