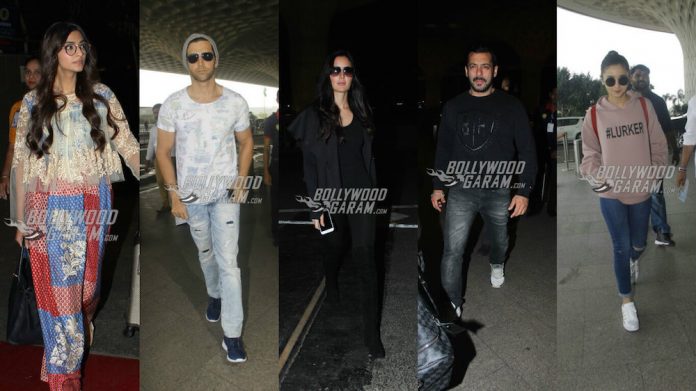 We look up to Bollywood’s best to learn what is trending and for fashion advice. At Bollywood Garam we are keen to bring you the latest and the best our stars are spotted wearing from simple to complex attires. Here’s what the fashion scene in Bollywood looks like.

Salman Khan was wearing a black Being Human T-shirt with jeans and white shoes. Salman Khan left for Austria for his shoot in his upcoming movie Tiger Zinda Hai. Tiger Zinda Hai is slated to release this Christmas.

Alia Bhatt was wearing a pink hoodie with blue ripped jeans and white sneakers. We don’t know where she was going but we are in love with her attire.

Hrithik Roshan was wearing a white T-shirt with blue jeans and blue shoes. The Kabil actor completed the look with his trusted grey beanie.

Katrina Kaif was wearing all black, seems Salman Khan and Katrina Kaif were twining. Katrina too was leaving for Austria. She is the leading lady for Tiger Zinda Hai and the two were spotted arriving at Mumbai Airport together.

Varun Dhawan and Natasha Dalal were spotted together going for a four day holiday to Bangkok. Varun is going to Bangkok for a commercial shoot, it seemed that he decided to take Natasha along to keep him company and sneak in some cozy me time in-between the shoot. #couplegoals

Tiger Shroff showed off his ripped bod in a blue tank top and blue jeans.We are in love with this handsome hunk and his chiseled looks.

Sonam Kapoor was snapped in a bright and colourful printed maxi dress, paired with an embroidered net top. While this may not be one of the best looks of the diva, we like it none-the-less!

Beauty Queen and proud mommy, Sushmita Sen was snapped exiting the airport with her lovely and daughters Renee and Alisah. Sushmita Sen was returning from a family vacation and was spotted wearing a white T-shirt, paired with ripped blue jeans and white sneakers.

Farhan Akhtar was wearing a blue T-shirt with blue jeans and sneakers as we caught him exiting Mumbai International Airport on March 15, 2017.

We spotted the romantic Deol at Mumbai Airport in March 12, 2017. Looks he was in a hurry to catch his flight as he didn’t stop to pose for the paparazzi. We really like his cool summer look though, the white shirt, blue pants and glares is a summer classic which can never go wrong.

We spotted Suniel Shetty wearing a white polka dotted T-shirt paired with blue jeans and white sneakers as he arrived at Mumbai Airport on March 12. Seems like this combination is a favorite among our Bollywood actors.

Sohail Khan sported a casual gym look as he arrived at the airport in grey track pants, paired with a Holi inspired Being Human T-shirt.

Rana Daggubatin was wearing a black T-shirt with blue trousers and brown loafers as he casually waited around the airport. #ZeroCelebrityDrama

Randeep Hooda proudly showed off his macho Viking beard as he entered Mumbai International Airport late at night. He was spotted wearing a black T-shirt paired with white trousers and brown boots. Quite trendy, we’d say.

Vaani Kapoor is on her way to Delhi to walk as showstopper for Rina Dhaka on Day 2 of Amazon India Fashion Week Autumn/ Winter 2017. See pictures of Vaani Kapoor straight from the ramp here.

Saiyami Kher was snapped at the Airport wearing a tucked in yellow jersey paired with blue ripped jeans. She topped it all off with some killer curls and a million dollar smile!

We caught veteran actress Sridevi flying solo this time. She looked lovely in a blue jumpsuit paired with a matching stole, wrapped around her neck. She chose to tie her hair up in a bun, which complimented the entire look.

The beige oversized handbag and beige-black sandals did justice to her entire airport look.

That’s all for last week, and we hope you enjoyed the compilation.