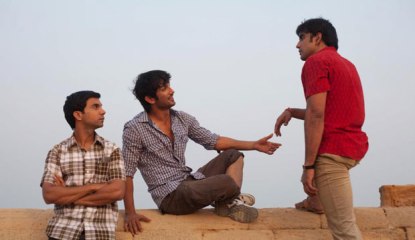 Abhishek Kapoor’s onscreen adaptation of Chetan Bhagat’s novel The Thee Mistakes of My Life, ‘Kai Po Che’ has been released on February 22, 2013. The actual meaning of the phrase ‘Kai Po Che’ in Gujarati, is as an expression of victory during kite flying.

The movie has debutante Sushant Singh, Amit Sadh and Raj Kumar Yadav, who will be seen playing the role of three friends Ishaan, Omkar and Govind in the city of Ahmedabad.  Ishaan loves cricket and dreams to own a cricket academy sometime in future. Govind is practical in nature and Omi is a person who depends on Ishaan’s final words. The story takes a turn when Ishaan meets a 12-year-old boy named Ali, who has immense cricket potential in him. Out of all the cast in the movie, Sushant is the actual charmer, who takes away all the credit.

However, Amit and Raj Kumar have also done their parts well. Amit Trivedi has composed some great music for the flick and the songs have been smartly inserted in the movie. The shooting locations have been well chosen and every little detail has been picked up from Bhagat’s novel. Overall, this will be a good movie to catch this weekend.