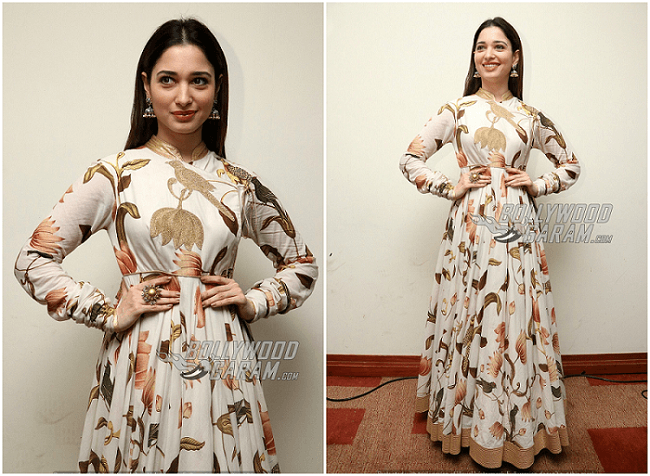 Baahubali 2 is all set to release this month!

The year’s much awaited movie is all set to hit theaters this summer. Baahubali 2 – The Conclusion which is a historical fictional action movie stars big names from the Tollywood industry such as Prabhas, Rana Daggubati, Anushka Shetty, Tamannaah Bhatia, Ramya Krishnan, Sathyaraj and Nassar.

Tamannah Bhatia essays the role of a warrior princess named Avanthika in this movie. She quotes  “If you look at the first part all women had strong roles. Its an action-war film. Its a rarity that in a war film which is ideally men centric that it had lot to do for me in the film.” She learned various skills to satisfy her part as a warrior princess. She further went on to say “My role in part one of ‘Bahubali’ was feminine, had song and dance. This time I have a very unconventional part. In part two I will be doing action, horse riding and sword fighting. I had trained for this film.”

All actors have worked really hard to fit their respective characters and worked for almost five years to complete the film! Baahubali 2 will be released  in 4k HD format and more than 200 screens are being upgraded to support it. This will be the first Indian film ever to have been released in the format. The promotions are going on in full swing.

The first part of this S.S Rajamouli directions had enthralled the audience, and now the wait for the second part is almost over! The movie which had ended on a white-knuckle and left the audience with the question ‘why did Kattappa kill Baahubali?’, will be released under Dharma Productions in Hindi.

The actress was spotted at the Baahubali 2 press meet, looking splendid in a Rohit Bal creation – an off white floral anarkali with gold details and a pair of lovely blue jhumkas. Along with her, the star cast and the director of the movie were also present at the even.

Baahubali 2 – The Conclusion releases all over India on April 28, 2017. Stay tuned for more updates on the movie exclusively on Bollywood Garam.